In the last diary entry we had just started off the carrier method, and the rats had spent the night in the cat carrier. 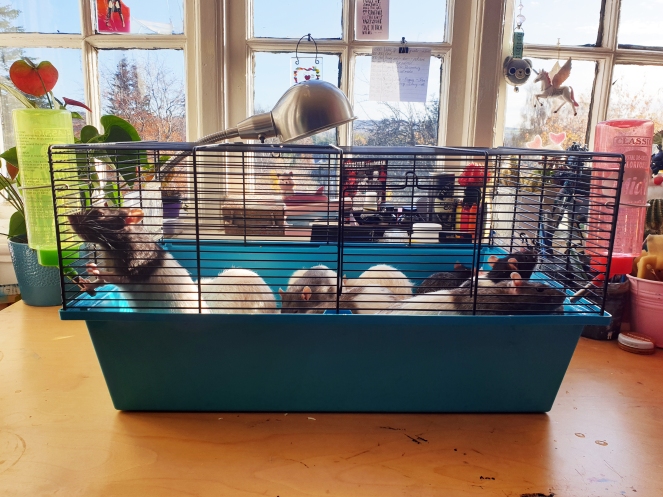 It is now Day 2 and we are moving them from the cat carrier to a small hamster cage. A barred cage like this is great for intros because you can easily see what is going on inside. We lined it with a fresh pile of their regular Aubiose substrate and scattered some breakfast for them to enjoy. This cage would give them enough space to distance themselves from each other, or separate out into their two groups, so it is good indicator of whether they are forming bonds or not. If they start to separate out too much we would know that we would need to go back a safe, but if the started to cuddle up we would know that they were okay to move on to a bigger space as they are likely starting to form bonds between the babies and original group.
At this stage we observed them just after the initial move, and then left them to get on with things themselves. We knew we needed to leave them alone, but still wanted to be in earshot just in case any fights broke out. Rats can pick up on human stress and anxiety, so it is a good idea to give them some separation during this period. They were getting on really well, and there were no signs of aggressive, or even defensive behaviour so we were happy to leave them to bonding.

We were so pleased when we came back in the afternoon to see them all sleeping together in fluffy cuddle piles!!
We decided to leave them overnight in this smaller cage just to ensure that we did not disturb this bonding too much by rushing to move them on to a larger space.
I scatter fed them in the evening, and gave them some veggies to munch on just before we went to bed. This time we left them in the hallway outside our bedroom – this way we could still hear them, but they were able to settle without us being there to interrupt them. 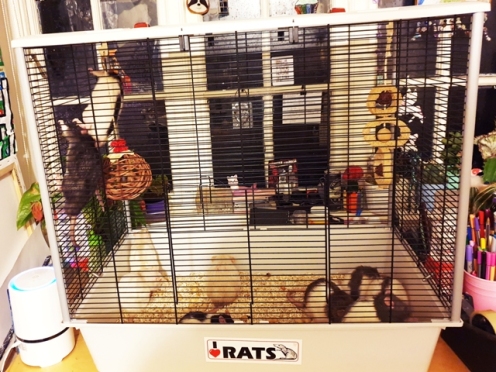 It is now Day 3 and we are moving them from the small hamster cage into our small rat cage, and giving them a couple of chew toys as enrichment. This cage gives them a lot more space so we would be able to see if the bonding would still happen in this bigger space, and we would see if any fights were likely to break out. The toys would as give us a chance to see if any rats were likely to become territorial or aggressive.
During the initial move we distracted them by scattering monkey nuts for them to munch on while exploring their new surroundings. There was a little bit of pinning behaviour between some of the older boys and Toothless. They had obviously pegged him as the more dominant of the two and were putting him in his place. Toothless seemed to be happy to submit to them, which would hopefully mean that they were establishing their hierarchies with minimal fighting. Shenron still seemed a bit nervous around the older boys, and would run away if they tried to pin him down, but he was more happy to join the cuddle piles than Toothless, who would mostly sleep on the edges, or sleep with the smaller branched off pile of rats. 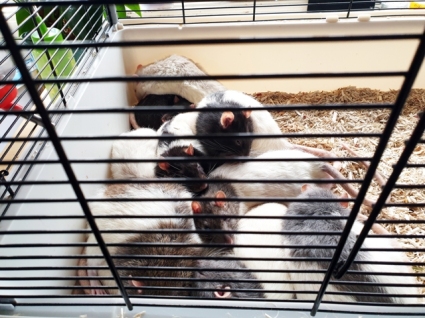 We have decided that if Toothless continues to distance himself, and Shenron continues to run from conflict that we might put them back a stage to the hamster cage. However, if they continue to show signs of bonding we will likely keep them in this smaller rat cage for a few days to ensure they continue to bond, and we can test them by adding other toys/hammocks/etc.
They are getting on really well so far though, and I am super proud of them for not fighting or showing much aggression! This is exactly how you want your intros to go, so I am really pleased with the progress so far. Fingers crossed that it keeps going this well.