If you caught the first post and second post you will already know that we are in the process of introducing our three new rat boys to the original mischief. We are on to day 3 of introductions…

We left off, in the previous post, with the rat boys being moved into the little rat cage, with a few hammocks introduced. They all settled in wonderfully, and there was no real fighting, just a few scuffles. They slept in the cage overnight, and we found them all cuddled up together in the hammocks in the morning.
This morning we added a rope, a litter tray, and a few toys. I then distracted them with a scattering of seed mix while I scooped up some of the poops in the substrate. With eleven rats in a cage designed for no more than three, it was starting to smell a bit unpleasant! For this reason, along with them all getting on so well we decided that it was time to introduce them into the main cage.

However, before the move into the large main cage, we decided it would be best to give them a free roam session to be able to properly supervise how they would interact in a larger space.
We also set up a pea-fishing station to give them a little bit of fun! I was starting to feel a bit guilty about them being stuck in all the little cages (their main cage is massive, and we usually have them out to free roam for at least an hour every day with us).
They had great fun pea-fishing! even, the new boys were getting involved in the water. They were all very well behaved in the larger space, and were mostly acting as they normally do. There were a few small fights, and a couple of dominance battles, but nothing serious, and nothing out of the ordinary, so we were happy to move them into the big cage.

Over the weekend, we had thoroughly cleaned out the whole cage. It was a proper deep clean, where we removed, and washed everything.
Before moving them into the main cage we set it up with a layer of substrate (including a scattering of a thin layer of dirty substrate from the small cage – doing this ensured that the big cage would smell of both groups of rats, and hopefully preventing territorial fighting), a couple of litter boxes, the two hammocks that had been in the little cage, a flat hammock shelf, a few toys, and two ropes. All of these toys and accessories are flat, and would be hard for the rats to pin each other in, as there are many options to escape. We have not seen many signs of fighting so far, just a bit of posturing, and scuffling, so we were not too worried, but I still did not want to chance introducing all of the toys straight away. 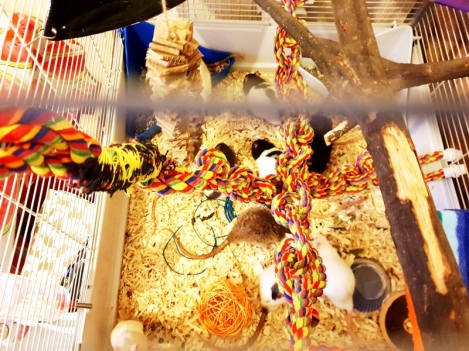 Tomorrow, and over the next few days, we will slowly add in more and more of the toys and accessories we have for the cage, as well as opening up the bottom half of the cage for them to explore… wish us luck!! and subscribe to keep up to date with this adventure!